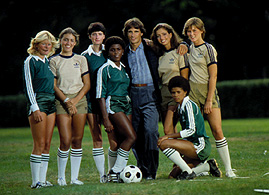 When the World’s Game and New York – One of the world’s most vibrant and sportsminded cities – come together, something extraordinary always results.

Such was the case with S.S.T., a unique New York City women’s soccer team. To begin with, not every soccer club has a famous designer as its founder and coach, or a top model, Janet Dailey, as its goalkeeper. Also included on the team was a former member of the Haitian national women’s soccer team, as well as other women who previously would have thought that a striker was a guy standing in the shadows of a singles bar, not someone who scores goals on a soccer field.

S.S.T. reflected the ways soccer had grown in this country – and how it continues to grow. Several years before founding the S.S.T.s, designer John Stavros was coaching soccer at New York’s Hunter College. Stavros, a native of Greece, has been a soccer enthusiast throughout his life, and it was his love for the sport that turned S.S.T. – short for Stavros’ Soccer Team – from dream to reality.

Women of Soccer would like to honor and remember one of the most famous female soccer teams in the world.

Please take a look at some photos and articles from around the world of a team that won several championships and changed the way women were viewed in the World’s sport.